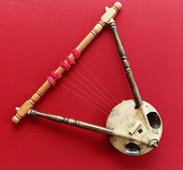 Simsimia can be found in Ancient Egyptian Tomb paintings. The instrument played an important role for people in the Canal region through their resistance songs, since the political crisis in 1956. Today, simsimia is still used during the celebrations of the citizens of the Canal zone, as well as other places in Egypt. The basic 5-string folk instrument is normally fashioned from the legs of a discarded chair from a local coffee house with an enamel bowl covered with goat skin.

-       Simsimia player of the award winning Tanbura Band from Port Said
-       Son of “Hassan El Ashry”, the famous simsimia player in Port Said and the Suez Canal zone
-       Started playing simsimia when seven years old, and accompanied his father in a musical tour to the United States when 11 years old
-       Composer of a number of musical pieces and songs, which have been recorded and distributed in Arwah album
-       Chosen by the “Songlines British Magazine” as one of the best 50 musicians in the world in 2006
-       He became a star in the Nile Project which included outstanding musicians from North and South Sudan, Ethiopia and Uganda.
-       Director of “Young Tanbura” musical school in Port Said city

Tabla or Darbuka is a traditional percussion instrument. It is a single head membranophone with a goblet shaped body used mostly in Egypt, as well as the Middle East and North Africa. The instrument’s material could be pottery or metal, covered by a membrane, called a drumhead or drum skin made of fish-skin, goat-skin or plastic. The model many professionals use, is compressed aluminum with a plastic head, and can be tuned.

-       First percussion player in El Tanbura Band.
-       Scholar of the master player “Salah El Hossary”.
-       Accompanied El Tanbura in many tours worldwide.
-       Carried out a number of percussion workshops in international world music festivals such as WOMAD and Larmer Tree and others.
-       Participated in a number of musical projects with Egyptian and foreign Artists such as Hindi Zahra, Alex Grillo and Brigitte Schildknecht.
-       Established, in collaboration with other musicians, Balady Band which combines between traditional Egyptian musical instruments and
western ones in its performances.
·         Workshop Venue: El Dammah Theatre: 30a Al Belaasi St., (Al Balaqsah), Abdeen, Downtown Cairo
·         Workshop Duration: 8 lessons/workshop, 2 hours/lesson, weekly for two months
·        The center call you to confirm registering after the enrolling of 5 persons and to inform you of the start date of the workshop
·         Each trainee should provide his own instrument. The Center offers the simsimia instrument for beginners at prime cost.
·         Deadline for registration is April 18, 2013, the workshops start on Friday, April 26, 2013
·         For further inquiries, please contact: +2 0223926768 , +2 01150995354, +2 01008954902