A New Egypt.. A New Begining 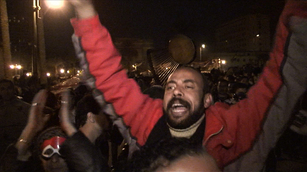 El Tanboura performing in Tahrir Square.
We are at the beginning of a new day in the history of Egypt in which every Egyptian can now claim justice, respect, not on the bases of wealth or power, but on their membership in the human community. This new day offers unprecedented opportunities for free expression, innovation and experimentation and the role of creative expression as a model for social change can now be realized.

In 2000, Zakaria Ibrahim established El Mastaba Center for Egyptian Folk Music. The Center builds on his own efforts of several decades to rescue the heritage of Egyptian folk music, bringing it back to its previous glory and recapturing the major role it had always played in the daily life of Egyptians. The Center also works to raise the status of the traditional musician whose music and creativity have been marginalized and compromised by state and tourism agendas.

Historically, Egyptian folk music came from the people and reflected the every-day life of the Egyptians. It shared with those people their joy and pain, their victories and defeats and was always a mirror of all the major happenings in Egypt.      Today El Mastaba follows this same road as it works on renewing the national memory and emphasizing the idea of belonging and working to recapture the roots of the Egyptian character, all of which come to life through the folk music.

For these reasons, El Mastaba played an active role in the Egyptian Revolution, bringing the groups under its umbrella to Tahrir Square to share their music in five evening concerts on the stages built in the square. The three bands that participated in the concerts were all chosen from the Suez Canal area, as their music has always been a symbol for peoples' resistance. El Mastaba presented the 'Hinna' band from Suez, 'El Waziry' band from Ismailia and the famous 'El Tanboura' from Port Said.

And now, to continue our celebrations of the new era in our country, El Tanboura will resume its Thursday performances in El Tanboura Hall, starting this week on the 17th of February at 8.30 p.m.

We also propose that all civil organizations working in art and culture meet and start a dialogue on the new opportunities open to cultural work under the new realities of freedom of speech. As organizations and individuals working in the field of culture, we should now work together for a new future for our country, one that we create ourselves and that is not imposed on us.

We invite you to join us as we celebrate this new beginning and continue this journey together.